Google Fiber is Coming to the Triangle! 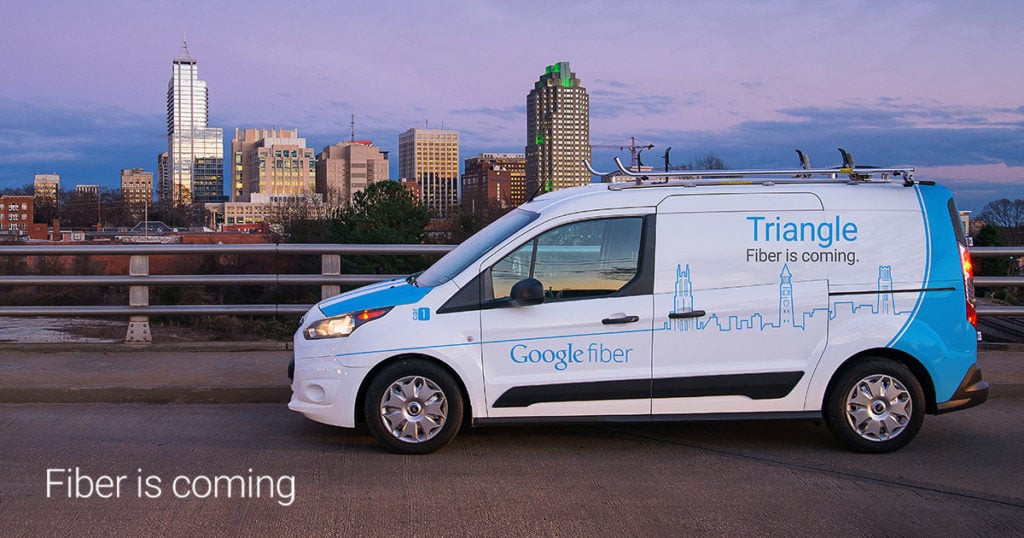 If you haven’t already heard, Google Fiber installation is currently underway for select areas of the Triangle, including Carrboro, Cary, Chapel Hill, Durham, Garner, Morrisville, and Raleigh. We among the first six states in the country, along with Georgia, Tennessee, Missouri, Texas, and Utah, to enjoy this new technology. Google workers are in the process of stringing and laying thousands of miles of brand new, state-of-the-art fiber optic cable. According to Google, this process will take “a long time,” but no specific time frame has been offered. You can sign up online to be the first to get the latest updates.

So, just what are the advantages of Google Fiber? First and foremost, a fiber connection provides lightning-quick internet service, with less time buffering while chatting, playing online games, or uploading videos. Google Fiber for TV provides several great features. A large pipe is used for the fiber connection, which translates into less compression and greater bandwidth…and HDTV with a crystal clear picture. A Network Box for your TV enables you to store up to 500 hours of programming in your DVR, as well as record up to eight shows at once. And Google fiber for your phone can be added for an additional $10 a month. Benefits include unlimited local and nationwide calling with affordable international rates, as well as privacy controls, such as call screening and spam filtering.

According to Ruth Porat, CFO of Alphabet, Google’s new parent company, the mission of Google fiber is to provide better experiences to their customers. “Like all of our access efforts, we’re really focused,” she said. “And our vision here is to create abundant and ubiquitous networks. We think there’s a lot of opportunity to improve the experience that users have, and that’s where the Fiber team is focused.”

Google Fiber helped increase revenue in Alphabet’s  “Other Bets” business by 108 percent in the first quarter, according to the company, but also pushed up the Google Fiber’s capital expenditures in that division to $280 million for the period. Alphabet executives explained that the company’s capital expenditures are  increasing as expected as it works to expand it fiber network across almost two dozen U.S. cities.

The rising capital expenditures are “primarily about continuing to execute on those cities,” said Porat. “We now are up to 22 announced cities, two most recent announcements being some buildings. We’re bringing fiber to like buildings in San Francisco and we’re working with the City of Huntsville.”

To find out if you are eligible to receive Google Fiber service, visit fiber.google.com and click “Check Eligibility.” If your neighborhood is not yet eligible, you will be prompted to enter your email address to sign up online to get the latest updates.