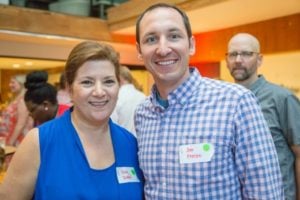 It’s a burgeoning trend seen in businesses across the country: an interest and active role in promoting social justice through marketing efforts or even implementing programs to help in their own communities.

Here in the Triangle, Jim Freeze and Vicky Ismail are opening a new restaurant in downtown Raleigh, “Carroll’s Kitchen,” to provide job training and employment to homeless women in the community. Freeze describes the venture as “a social enterprise restaurant with a vision to end homelessness for women in Raleigh and make it a better community for everyone.” Carroll’s Kitchen was named after Ernest and Delta Carroll, who were community and church leaders in Raleigh in the early 20th century.

Carroll’s Kitchen will have approximately 12 employees, eight of whom will participate in on-the-job training. The owners decided to reach out to homeless women in the community, as well as those recently released from prison, as job opportunities are sparse for both groups of women. In addition, these women often lack the life and job skills needed to function well in society. “There’s a lot for men, there’s a lot for women with children,” said Ismail. “But if you’re a woman that’s single, there’s not a lot out there.”

Candidates for employment at Carroll’s kitchen are selected through referral partners. Several of the employees who were referred from homeless shelters will be living together in affordable housing and will be required to take life skills classes. They will earn between $9 and $12 an hour, which is higher than the federal minimum wage, currently $7.25 an hour. The owners’ vision is for these women to work at Carroll’s Kitchen for a year, hone their skills, and graduate by joining the workforce, or even opening their own businesses and employing a new group of homeless women.

Carroll’s Kitchen is located on the corner of S. Wilmington & E. Martin in downtown Raleigh. Photo courtesy of Kickstarter.com.

Freeze and Ismail hope Carroll’s Kitchen will be instrumental in helping break the cycle of poverty, and create a cycle of hope and empowerment, for homeless women in the community. “Work brings dignity, and when people are working, they make better choices,” said Freeze.

The restaurant will be located on Martin Street in the space that was formerly The Square Rabbit, which closed last February. Freeze and Ismail are in the midst of a Kickstarter Campaign that runs through September 11. They are raising money online to help with the costs of construction, equipment, training, and housing.

Freeze and Ismail are hoping to inspire many in the community to get involved with the project and help make a positive change. Interested in helping? This is the final week of Carroll’s Kitchen’s Kickstarter Campaign; donate here. Carroll’s Kitchen plans to open its doors in the next few weeks.

We at Real Estate Experts applaud Carroll’s Kitchen for this endeavor and look forward to visiting the restaurant in the near future!