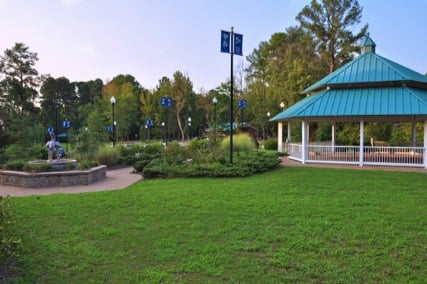 You may not have heard of it, but the small town of Rolesville, located in northeastern Wake County, is making news as one of America’s Top 30 Boom Towns, according to Realtor Magazine. Rolesville is the second oldest town in Wake County and has been growing rapidly for the past several years. In fact the town’s population has grown more than 315% between 2000 and 2010, which makes it one of the fastest growing towns in America. Rolesville has been called “one of the Research Triangle Region’s best-kept secrets,” but not for long! Residents of Rolesville love the fact that they enjoy the amenities of an urban area with the town of Wake Forest right next door, and can easily commute to RTP, yet enjoy the small-town vibe that Rolesville has maintained.

With the formation of the Rolesville Economic Development Action Committee (REDAC), a cooperative effort of the Town of Rolesville and the Rolesville Chamber of Commerce, significant efforts have been put forth to promote economic development in the town. The REDAC is particularly interested in wooing businesses within the game development/interactive digitial media industry. The Triangle already has a reputation as a leader in this sector, with more than 30 companies based here, including Red Storm Entertainment and Epic Games. And all the major universities – N.C. State, UNC-Chapel Hill and Duke – boast strong education programs across a large range of game development technology areas, such as artificial intelligence, computational geometry, and 3D modeling and animation.

Commercial space in Rolesville. Image courtesy of the Town of Rolesville.

Image courtesy of the Town of Rolesville.

Rolesville is an ideal town for families, with great events in that small town environment. This summer, the town is featuring a free summer concert series at Mill Bridge Nature Park, which includes live music and food trucks, as well a free family movie series held at Rolesville Middle School on the football field. Other summer events include Camp C.A.R.E., which teaches kids to say no to drugs and alcohol, and Summer Day Camp for kids ages 6-11 years.

The 22,000-square-foot Northeast Regional Library, a brand-new facility serving Rolesville, Wake Forest, and North Raleigh, just opened its doors on April 16. The new library has 150,000 books and 29 computers available to the public. It will host 17 weekly programs for children, along with numerous adult programs.

If you love Southern cookin’, Rolesville is the place for you! Favorite eateries include the Rolesville Diner, Fitzgerald’s Seafood Restaurant, and Eddie Boze’s Top Dog. The town also offers an authentic Italian pastry shop, Bakery la Dolce Vita, with delicacies all made from scratch. And if you love to shop, you’ll be glad to hear that Rolesville is just a 7-mile drive to Triangle Town Center, and just a 12-mile drive to North Hills Shopping Center.

For further information about homes for sale in Rolesville or to learn about upcoming construction, send us an email at [email protected], or call us at  919-813-6449.